Anterior Pelvic Tilt.. What is it? What can I do about it?

If you think of your pelvis like a bowl full of soup and you then take that bowl and spill the soup in front of you, that position is called an “anterior pelvic tilt.” 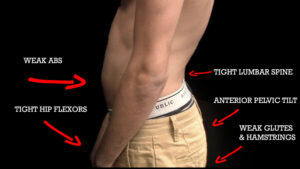 The internet is full of trainers, doctors, physiotherapists, and many other people saying that having an anterior pelvic tilt is why you have lower back pain, knee pain, neck pain, and so on.. It might sound like I’m about to tell you that your pain has nothing to do with the position of your pelvis and you shouldn’t worry if you’ve tried everything to correct it.

The truth is the position of your pelvis does matter. In fact, it really matters. But the way to fix it goes far beyond stretching those tight hip flexors and strengthening those weak hamstrings and core. It is not as simple as reminding yourself to stand up with better posture either… unless you want to think about it every 10 seconds. The reason you have the anterior tilt is because that’s the only position your body can feel BALANCED and keep you BREATHING.

Have you ever been told to stand up straight and thought you were doing a good job, then later found out that your head or whole body is leaning too far forward or sideways? The point here is that what we think is “standing straight” can oftentimes be quite far from it. But our brain tells us that this is our “straight” because it’s the most comfortable position to… remain balanced and breathe.

Since those 2 activities (breathing and staying balanced when standing/walking) are so essential, retraining and re-calibrating how you do those two things is what will make a difference in your anterior pelvic tilt, in how tight your hip flexors feel, in your breathing, in your pain and the list goes on. The best thing about taking this different approach is that it makes a difference RIGHT AWAY and you don’t have to worry about stretching and strengthening so many different muscles. You’ll still have to do some homework to get the results, but this way you are getting to the root of the issue!